One month after Super Typhoon "Rai" passed through the Philippines, the power supply has already been restored to almost 50%. However, half the city is still waiting for electricity to be restored to them as well. Banks and gas stations have also recovered and the kilometer-long queues have not existed for about a week. The start of schools after the Christmas break has still been postponed, as the Covid19 pandemic means that classes in the Philippines are still being held online, and in some cases there is no electricity or the Internet connection has not yet been restored. 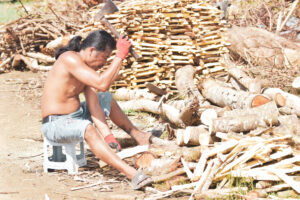 Tens of thousands of people are still living amid the debris left behind by the super typhoon. With tarpaulins and posters, people in the slums in particular have tried to build temporary shelter. Although there are some reconstruction efforts by government and private initiatives, many localities and even small islands are unreached by help. These are precisely the places that we as CFAI have taken to heart.
Over the past few days, a team from CFAI has visited the island of Bohol, which was hit particularly hard. Our team was able to distribute over 500 aid packages directly. With tears in their eyes, the people thanked our team. Talking to the inhabitants of a small fishing village, our staff felt the hopelessness of the people and the traumatic experiences they went through during the night of the typhoon. Their village is right by the sea 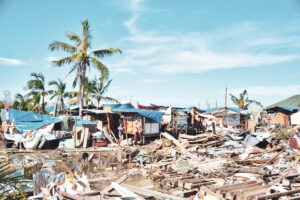 and the typhoon caused a storm surge of 2 to 3 meters. Many of the huts are only one floor and were therefore completely destroyed. The pastor of our partner church, with whom we work on site, showed our team how in their church only the tiles were left. The roof and walls were completely destroyed. An old lady told how she spent the last four weeks just thanking God that she survived the typhoon. So far, she has not been able to take care of rebuilding her house at all. For her, it is a miracle that she is still alive. People were evacuated to the local school, which is the most stable building far and wide. The death toll would have been much higher had people not responded to the evacuation call. The death toll is around 500, with many people still missing. With the cell phone network down, the missing have not yet been declared dead, but hope is dwindling by the day. 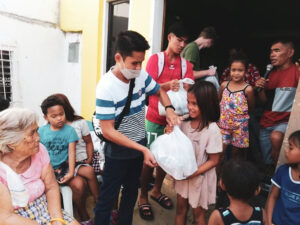 With a mobile emergency generator that we had with us, people were able to charge their cell phones and flashlights. The cell phone network is still not functioning and the power and water supply could also drag on for weeks or months.

People desperately tell us that the most important thing for them, besides food, is a roof over their heads. We are still in the coldest time of the year in the Philippines with lots of rainfall.

Our team has now identified over 400 houses that we would like to rebuild in the next few weeks. We are coordinating this together with our local partner communities. In addition to handing out building materials, it is important to us that the people can draw new hope from their trust in Jesus Christ. 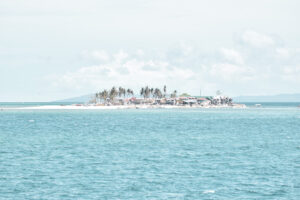 some of which are only 300-500m in diameter, are totally overpopulated and the people there live simply from fishing. The people lived without electricity even before the typhoon. On these islands people live in very simple wooden huts. For many years we have been able to reach these islands again and again with the Gospel with our mission teams from Germany. A team of CFAI has set out with several tons of relief supplies to reach these islands, which is only possible with simple wooden boats. Our team was able to distribute 3-4 tons of relief supplies there and they want to bring hope to the people by looking up to God. 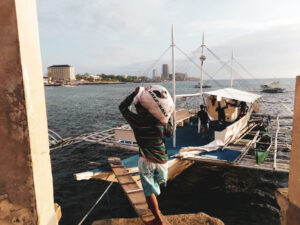 In the middle and south of the Philippines it will probably take weeks and months until at least a little normality can return. Even a highly modern city like Cebu City is still struggling with the reconstruction 4 weeks after the typhoon and here resources and aids are available to some extent, which cannot be said about the small islands and remote fishing villages.

We are very grateful for all the donations and support that allows us to bring some light into this hopelessness and give people courage for a tomorrow.