Two months after the devastating typhoon, about 20% of Cebu City, a city of millions, is still without electricity. Even though some normality has returned for many, thousands of people are still desperate for electricity, water - basic services. 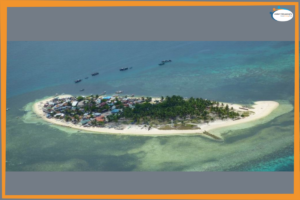 At CFAI, typhoon relief efforts continue at full speed. Several teams are stationed on several islands at the same time. One team visited several small islands off the island Bohol. On the smallest island, only 75 families live. It took only 30 seconds to walk from one side of the island to the other. This island was completely flooded during the typhoon and the inhabitants were able to save themselves into the only two-story building and thus survived the floods and the typhoon. The school building is the only two-story building and became a shelter for the people during the night of the typhoon. These islands were already living without electricity and water supply before the typhoon. They live from fishing, which they sell on the mainland to buy rice and water in canisters. Since most of them have now lost their 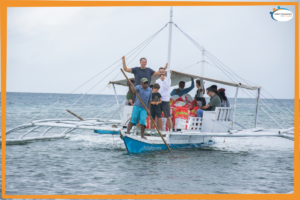 small fishing boats due to the typhoon, they also had no access to food and water. We were able to transport several tons of rice, emergency supplies and water over several days to these islands, which can only be reached by small wooden boats
called “pump boats”. On the islands we were able to pray for the sick, give them encouragement, comfort and listen to their stories of survival during the night of the typhoon.

At CFAI, at the same time, we were getting building materials to help over 400 families rebuild their homes. Since Cebu City itself was severely affected during 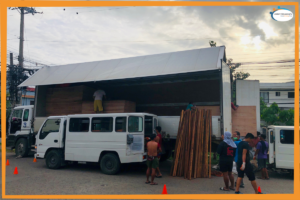 this typhoon, building materials became scarce within a few days. Through a contact in Manila, we were able to purchase about 50 tons of building materials in two large shipping containers and have them delivered directly to Cebu, from where we then distributed them to the affected locations in several trucks.

We stationed another CFAI team on the island of Bohol. There, the team coordinated with several communities to rebuild over 200 homes. With the communities, we have already been able to start several food distributions and home groups in the severely affected areas. Our concern for the people goes far beyond the reconstruction of the house. We want to reach people with the love of Jesus and the hope we have in Jesus. 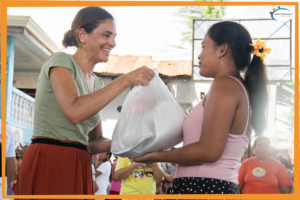 over 200 homes in a small fishing village. Every day there is a "soup kitchen" for the children with a children's program while the building materials are distributed. The small partner church of about 150 members reach an amazing 850 children per week with the children's program. We are grateful for these partnerships. The people who genuinely lost everything in the typhoon and looked hopelessly at the rubble of their homes. Into this hopelessness, we can be light and hope through the provision of food, the rebuilding of their homes and the message that God loves them. One affected woman and mother of five said: 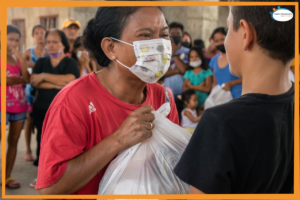 "After the typhoon, we used up our last savings to buy tarpaulins to at least have shelter from the rain. But this left us with no money for food. Out of nowhere came the hope package from CFAI with food, drink and even hygiene items. When we even got the building materials for our house, we were just speechless."

Our team, based on Bohol, continues to visit the tiny islands. Next week, the team will visit a small island where it was feared that all the people had perished, as there was still no contact several days after the typhoon. Thank God, it turned out that the people survived and only the contact was difficult to establish. But also there people lost everything and our team will go there to see the destruction.

The typhoon relief opens the doors for our local church partners to start biblestudy groups and reach these places and islands with the message of Jesus.

More of these outreaches then in the next Typhoon Update.